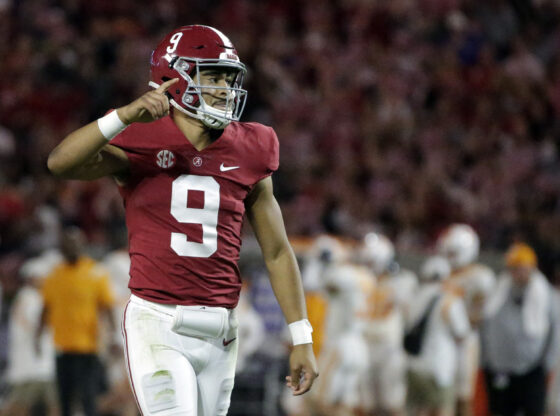 One of the many things that make college football the greatest sport on the planet is its traditions.

The pageantry, mascots, marching bands, fight songs and pregame festivities all make autumn Saturdays the best days of the year.  But you have to look good to play good, and nothing is more associated with a team’s identity than its uniforms.

Today we reveal the dozen best uniforms in college football.

The University of Pittsburgh rolled out throwback uniforms in 2017, harkening back to Pitt’s glory days of Tony Dorsett, Dan Marino, Bill Fralic and Jimbo Covert.  The script Pitt on the bright yellow helmet is dazzling, as is the sharp contrast of the white accent on electric blue.

The U is trying to resurrect its brand.  Once the most dominant football program in the land, Miami is no longer feared.  But the Hurricanes hope to restore their mystique.  Part of the plan is to return to one of the sweetest looks in college football.  The orange jerseys accented in green, coupled with the clean white hat with three-bar stripe and dual-colored “U” logo is sharp.  Super sharp.

Alabama makes this list because its uniform remains unchanged.  One of the cleanest and simplest ensembles in college football history, the Tide’s home red looked superb on Bart Starr, Joe Namath and Kenny Stabler.  It is just as exquisite on Tua Tagovailoa today.  The helmet is what makes the uniform: solid Crimson with a simple white stripe and block numerals on the side.  Well done, ‘Bama.  Well done.

Washington sports a prettier, brighter shade of purple that Northwestern, Kansas State or TCU.  Like all Nike-sponsored schools, the Huskies wear too many combos.  They should stick with their best: solid gold pants, purple jersey with crisp white numeral, and a gold helmet with a two-color, three-bar stripe.  And the purple block “W” on the side is simply badass.

USC’s home red jerseys — coupled with their yellow pants — really works. Props to the Trojans for sticking to their brand and not succumbing to the terrible “uniform of the week” approach that is prevalent in college football today.  We love the single yellow stripe on the shoulder pad and Trojan on the side of the hat.

Georgia has got it all goin’ on.  Playing between the hedges with a spike-collared bulldog on the sideline is epic, but the uniform puts it over the top.  We like the home reds.  Gray pants accented by a tri-colored stripe of black, white and red are sublime.  Cap it off with a single white-striped red helmet with Green Bay Packer-like “G” on the side and you’ve got a winner.  How ’bout them Dawgs?

While UCLA plays a mediocre brand of football, their uni’s are anything but. The Bruins use only three colors: Powderkeg Blue, Mighty Gold and white. And the script Ucla on the helmet, along with the two-color, three-striped sleeve is retro-cool.  Nothing looks better in the late afternoon sunlight of the Rose Bowl, even if the Bruins are behind on the scoreboard.

Ole Miss is old school, and the Rebels home uni is magnificent.  The red jersey with two white stripes on the shoulder, gray pants accented by one red and one blue stripe, and a blue helmet scripted with Ole Miss make theirs a remarkable look.  Add a tailgate party featuring white linen tablecloths followed by a game-day walk through The Grove and you have the makings of something special.

We can think of no uniform in any sport – and that includes the Yankees and Dodgers – that is as clean, simple and traditional as that of Penn State. The navy blue and bright white is impeccable, as is the all-white helmet with a single navy stripe.  PSU’s look includes no names, no frills and no stripes [other than the lid].  The Nittany Lions uni is timeless and pays homage to Penn State’s roots.  Displaying numbers on the shoulders is cool. The Nike swoosh is not.

Ohio State’s home and road uniform both make our list.  The Scarlet jerseys with plain white numbers are brilliant, and the Gray pants with scarlet, white and black accent stripes are remarkable.  Then there’s the helmet, easily one of the best in college football.  It’s Gray, which is nice, and features a Scarlet stripe trimmed in white and black, which is first rate. But the Buckeye pride stickers – which must be earned by the player  – make the helmet a sight to behold.  [BTW: whoever suggests that Ohio State ever again breaks out that all-black alternate nightmare they wore against Michigan State on October 5 should be executed on the spot].

We love everything about LSU home games.  Moonshined-up Tiger fans grilling gator in the parking lot on a steamy Saturday night, a caged Tiger in the end zone of Death Valley, and striped lines every five [rather than the traditional ten] yards on the lush green field of Tiger Stadium.  One of the few schools that wears white at home, LSU features the colors of Mardi Gras.  Purple, yellow and white rocks — as does the two-color, three-stripe design on the shoulders.

Nothing in college football is more traditional than the Maize and Blue of Michigan.  While the program is overrated, the uniform is not.  No hat is more iconic than the Wolverines’ wingtip helmet design, which dates back to 1938.

Dishonorable Mention:  Notre Dame dropped off this list when the Irish busted out the way-too-shiny gold helmet in 2011.  Florida State fell out when the Seminoles abandoned their classic garnet-and-gold jersey in 2014 for their current garish look.  Are those Egyptian hieroglyphics along the collar and shoulders?