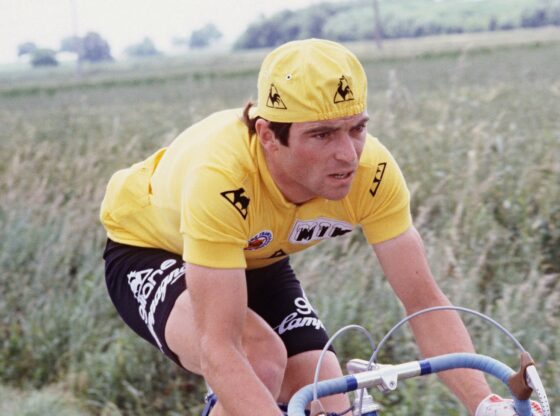 The most famous cycling event in the world takes place in France and the greatest French rider of all time is Bernard Hinault.

Born in Yffinac, Brittany, France on November 14, 1954 he started cycling professionally at the age of 20.  One of his early wins came in 1977 in the Criterium du Dauphine Libere, when he beat many of the world’s best in this eight-stage event on a mountainous course.  The following April, he won his first Vuelta a Espana, one of road cycling’s three Grand Tour [major European] events, and emerged as an international star.  Hinault [pronounced ee-no] went on to win his first Tour de France title a few months later and was hailed as the next great French cyclist.  He won his second straight Tour de France in 1979 and set out to win cycling’s Triple Crown [Giro d’Italia, Tour de France and the world championships in the same year] in 1980, which had only been accomplished by the great Eddy Merckx in 1974.  He won the Giro d’Italia but abandoned due to a knee injury while wearing the yellow jersey as race leader in the Tour de France, only to come back and win the world championship later in the year.

Nicknamed “Le Blaireau” [The Badger] because of his fighting style when cornered, Hinault went on to win the Tour in 1981 and 1982 but sat out the 1983 event due to knee problems.  He changed teams and returned for the 1984 Tour and finished second to teammate and countryman Laurent Fignon, who had won the previous year as well.  Mr. Hinault introduced meditation and relaxation routines into his training and came back to win the Tour in 1985 despite riding much of the race with a black eye suffered during a crash.  His lieutenant in that event was teammate Greg LeMond who was instructed by his team to support Hinault and not try for victory.  “Le Blaireau” was then asked by his team, La Vie Claire, to return the favor in 1986 and guide LeMond to victory, resulting in the first-ever win for an American in the Tour de France.  Hinault retired from cycling after that race at the peak of his career.

In cycling, the pack is called the “peleton” and Hinault was known as the “boss of the peleton” or “le Patron”.  He won more than 250 pro races in his 12 year career and is one of four men to have won the Tour de France five times.  He is one of six cyclists to have won all three Grand Tour events and one of two riders to have won each more than once [Alberto Contador].  In all, he amassed 10 Grand Tour victories, second all-time only to Merckx’ 11 wins.  Hinault was considered a complete rider, meaning he could climb, sprint and time trial and won all classifications in the Tour de France, including mountains, overall and points jerseys.  He finished first or second in every Tour de France event he finished and is the last Frenchman to win cycling’s most prestigious event.

On this date in 1985, Bernard Hinault won his fifth and final yellow jersey in the Tour de France.