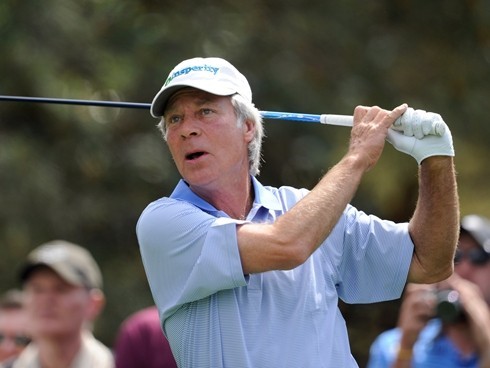 Happy 64th birthday to one of the greatest putters the game of golf has ever seen.

Born in Austin, Texas, on this date in 1952, Ben Daniel Crenshaw is the youngest of three children born to a mother who taught school and father that was an attorney. Crenshaw’s father was a scratch golfer and member at the Country Club of Austin, where he introduced his son to the game when Ben was six. He won his first tournament as a fourth grader, shooting 49-47 to win the Casis Elementary Open. Crenshaw got his picture in the local newspaper after shooting 74 at age eleven and qualified for the Texas state junior championship at 13 by shooting 69. He was then sent to the back tees—the blue markers—and told by his father to “stay there.” Crenshaw won the Texas state junior title at 15 and repeated the following year, a summer in which he also won the Jaycees Junior Championships, a prestigious national tournament won by Jack Nicklaus in 1957 and Raymond Floyd in 1960. The diminutive Crenshaw attended Austin High School, where he played guard on the basketball team, catcher in baseball and quarterbacked the Maroons football team.

In June of 1970, the immensely-talented Crenshaw qualified for the U.S. Open at Hazeltine Golf Club outside Minneapolis, finishing 32nd and beating Nicklaus, Lee Trevino [Daily Dose, December 1] and Arnold Palmer in route to earning low amateur honors. That fall, he accepted a golf scholarship to the University of Texas to play for Harvey Penick, who had mentored him as head professional and golf instructor at the Country Club of Austin. Crenshaw became the first freshman ever to win the NCAA individual title, shooting a 15-under par 273 at Tucson National while leading the Longhorns to the team title over the Florida Gators. In April of 1972, he played in his first Masters, tying for 19th and claiming the first of two consecutive Low Amateur honors he would earn at Augusta. The following month, Crenshaw made a 30-foot putt on the final hole to tie teammate Tom Kite—a junior golf rival from Austin–for the 1972 NCAA individual title. The 5’9”, 165 Texan won his third straight NCAA individual crown—a record later matched by Phil Mickelson—before turning pro following his junior year.

After winning the PGA School tournament by 12 shots, Ben Crenshaw became the second player in Tour history [Marty Fleckman, 1957] to win the first event of his career at the San Antonio-Texas Open. Three weeks later, he lost the World Open by one shot and, after six weeks as a professional, had earned $ 76,749 in prize money. The hot start would fade, as Crenshaw did not win another event until 1976, when he won three times. Following five runner-up finishes in major championships, “Gentle Ben” won the 1984 Masters before collecting eight more PGA Tour victories from 1986 to 1994. Harvey Penick, the only instructor Ben Crenshaw ever had, died the Sunday before Masters week in 1995. After flying 950 miles to attend the funeral, an emotionally drained Crenshaw returned to Augusta on Wednesday night. He had missed three cuts in his last four starts and was playing poorly but after a tip from Carl Jackson, his long-time caddy, he fired a 14-under-par 274 to edge Davis Love III by one stroke in route to his second green jacket. In one of the most inspired performances in Masters history, Crenshaw later said, “It was kind of like I felt this hand on my shoulder, guiding me along.” It would be the final Tour win of Mr. Crenshaw’s career.

Ben Daniel Crenshaw is one of golf’s great ambassadors. He burst onto the scene with talent, charm, charisma and appeal, prompting former Tour player Orville Moody to proclaim, “He’s the best to come along since Nicklaus.” Crenshaw won 19 PGA events, including two Masters, and played on four Ryder Cup teams. In 1999, “Gentle Ben” captained the U.S. team to one of the greatest finishes in Ryder Cup history at The Country Club in Brookline, Massachusetts, as the Americans captured 8 ½ of the final day’s 12 points to regain the Cup. Crenshaw is a noted golf historian whose favorite course is Pine Valley and hero is the great Bobby Jones, so winning the Bob Jones Award in 1991—the highest honor given by the USGA in recognition for distinguished sportsmanship in golf—took on special meaning. Mr. Crenshaw finished in the top 10 in all four majors in 1987 and is currently a partner in Coore & Crenshaw, a golf course design firm. He is a three-time recipient [1971-73] of the Haskins Award as the most outstanding player in college golf and was inducted to the World Golf Hall of Fame in 2002. In April of 2015, Ben Crenshaw played in his 44th and final Masters.