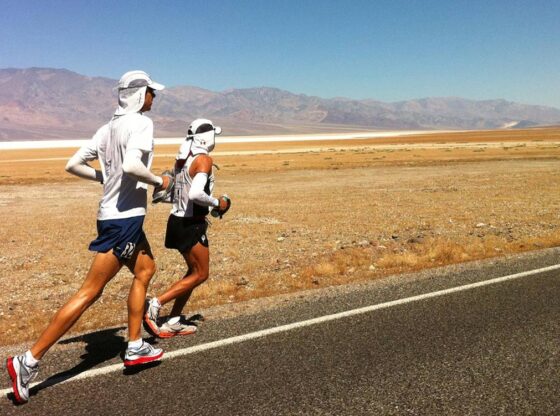 The Badwater 135 is the world’s toughest foot race.

Covering 135 miles non-stop from Death Valley to Mount Whitney, California, the Badwater 135 is the most demanding and extreme running race on the planet.  The race is held in July, when temperatures in Death Valley can soar to 130 degrees.  It commences in Badwater Basin, the lowest point in North America at 280 feet below sea level, and finishes at Whitney Portal, 8,374 feet above sea level.  The Portal is the trailhead to the Mount Whitney summit, the highest point in the contiguous United States.

The race covers three mountain ranges that combine for 14,600 feet of vertical ascent and 6,100 feet of cumulative descent.  On the unforgiving valley floor, air temperatures are scorching.  But it is much hotter on the black asphalt, where it can reach 200 degrees — and there are no aid stations.  The brutal stretch of highway takes competitors through some of the planet’s most unforgiving terrain, traversing through places with names like Mushroom Rock, Devil’s Cornfield, Stovepipe Wells, and Lone Pine.

It all started with Al Arnold.  In 1977, after failed attempts in 1974 and 1975, the Sir Edmond Hillary of ultramarathons became the first to run from Badwater to Mount Whitney.  He ran the race solo, with a van following him the entire way.  Arnold finished in 84 hours and never ran the route again.  The second running of Badwater came four years later, when Jay Birmingham completed the route.

The Badwater trek became an official footrace in 1987.  That first year, five runners – three male and two female — managed to finish.  By 1990, the field had grown to 20.  Today, an international field of up to 100 ultramarathoners compete each summer in the world’s toughest footrace.

Badwater 135 competitors are given 48 hours to complete the race.  Finishers receive a free tee-shirt and belt buckle.  Runners are required to wear a GPS tracker issued by race organizers and must arrive at four designated points along the course [Mile 50, Mile 72, Mile 90 and Mile 122] within a specified time.  Those who fail to meet the time cut-offs must withdraw.  Each athlete is accompanied by their own support crew of no more than four members, one of whom may serve as a pacer.  Pacers run alongside competitors to help them fight fatigue, battle through hallucinations and lift their spirits.

The race is an invitation-only event.  A four-person committee of race organizers, including Badwater director Chris Kostman, review applications from hundreds of runners from around the globe to select the field, which is entirely elite.  The field is capped at 100 due to the limited availability of hotel rooms along the race route and parking at the start and finish lines.  Also, there is only so much ice that can be produced and sold on the course.  To be considered, runners must have officially completed at least three 100-mile ultramarathons during the prior year.  Applicants must also answer questions such as, “What is the meaning of life?“, “Who is your Badwater 135 idol?” and “How do you give back to the sport of ultrarunning?”

A sumo wrestler once applied, saying he had finished a marathon in 12 hours.  A kayaker with no ultrarunning experience also submitted an application.  Both were denied.  Athletes are notified in early February of their status for the July race.  The entry fee is $1,495, which does not include the cost of travel, lodging, supplies, a crew or a crew vehicle.

Competing in Badwater – known as the Challenge of the Champions — is not for the meek.  Death Valley is the closest place to hell anywhere on the planet.  Frank McKinney, a seven-time Badwater 135 finisher, dubbed the course “the white line from hell to heaven.”  It is hard to describe the punishing nature of Badwater.  “It is obscenely tough,” said Dave Krupski, a Florida attorney and running coach who finished fifth in 2015.  “This appeals to people who like to see what they are made of.”

Art Webb has run Badwater 15 times.  To prepare for the 2012 race, the 70-year-old Santa Rosa native ran 120 miles per week for three months – half on flats, half on hills.  After his run, Webb baked in a 170-degree sauna for up to an hour, helping him acclimate to the blast furnace of Badwater.  In July 2012, Webb finished the 135-mile race in a personal-best 33 hours, 45 minutes.  He remains the oldest person to officially finish the Badwater 135.

Over 900 hardy souls have completed this world-renowned event since its inception four decades ago.  The youngest Badwater finisher is Nickademus Hollon, a 19-year-old San Diegan who covered the course in 33:21.29.  The 2016 race was historic.  Lincoln, Nebraska’s Pete Kostelnick traveled from Badwater Basin to Mount Whitney in an astonishing 21:56.32 to set a men’s record.  That same year, Alyson Venti of Barbados finished fifth overall while establishing a new women’s mark of 25:53.07.

To combat the unrelenting sun and drying winds, many competitors wear long sleeves and pants during the day.  Support crews chart food, liquid and electrolyte intake along the route, and frequently check their runner’s weight to ensure it is stable.  Sunscreen and shrouded hats are a must, as is ice.  A ten-pound bag of ice costs $5 along the course.  Runners wear ice packs under their hats, on their chests to cool internal organs, and soak in tubs of it to lower body temperature.

The world’s toughest footrace is mentally and physically grueling.  The route is diabolical, and the threat of dehydration, heat stroke, heat cramps and heat exhaustion is severe.  Crews must keep runners alert and focused during the 48-hour event.  Rest stops must be brief, and runners cannot be allowed to get too comfortable sitting down, as time waits for no one.

Badwater is tough on toenails.  The 200-degree heat of the pavement melts running shoes, so foot care – and finding the right socks — is critical.  Black shoes are a no-no, as they absorb too much heat.  Some runners wear padded orthotics for added insulation against the heat, and many athletes tape their toes and feet to help prevent blisters.  Art Webb liked to wear his most comfy shoe the first day and change to another pair with the toe box cut out the second day.  Some years, the electrical engineer wore flip flops for even more relief.

The 2018 Badwater 135, held July 23-25, was the 41st running of ultramarathoning’s most iconic race.  One-hundred competitors, representing 22 U.S. states and 18 countries, endured the oppressive heat of this one-of-a-kind foot race in quest of the Holy Grail of Ultramarathon: the Badwater Belt Buckle.