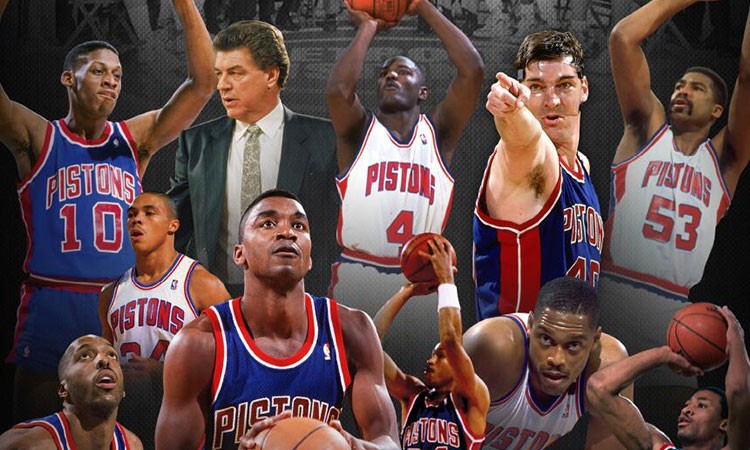 The Detroit Pistons of the early 1980s and 1990s – the Motor City Bad Boys – were teams fans loved to hate.

Sandwiched between the Lakers’ and Celtics’ dominance of the 1980s and the Chicago Bulls’ run in the 1990s, the Pistons’ back-to-back NBA titles are often viewed as a transitional period in NBA history.  To many, they represent the league’s darkest era.  The Bad Boys were a physically aggressive, defense-oriented core of players who literally fought their way to championships in 1989 and 1990.

Detroit’s inability to successfully defend Michael Jordan led Pistons head coach Chuck Daly to institute the Jordan Rules.  Daly vowed that His Airness would never beat the Pistons again.  Number 23 was to be stopped by any means necessary.  “Any time he went by you, you had to nail him,” explained Daly years later.  “If he was coming off a screen, nail him.  We didn’t want to be dirty – I know some people thought we were – but we had to make contact and be very physical.”

The world hated the Bad Boys.  Stylistically, they were perhaps the ugliest team in NBA history.  Coming on the heels of Showtime – the nightly basketball ballet performed by the Lakers – the Pistons played like street thugs.  More WrestleMania than basketball, Detroit was to the NBA what the Philadelphia Flyers’ Broad Street Bullies were to the NHL in the mid-1970s.

The Bad Boys seemed willing to do anything to win.  Pistons games featured on-court mayhem.  Detroit was led by Isiah Thomas, a quicksilver guard from Chicago’s hardscrabble west side who had played for Bob Knight at Indiana.  Only 6’1”, the Pistons’ captain refused to be bullied.  Playing with a no fear mentality, Thomas was at the center of most on-court altercations.

Skilled shot blocker John “Spider” Salley ruled the paint.  He was joined in the low post by the baddest of the Bad Boys — Rick Mahorn — a physically imposing player that looked more like a bouncer than an NBA forward.

Small forward Dennis Rodman was known for his defense and rebounding.  The Worm earned consecutive NBA Defensive Player of the Year honors in 1990 and 1991.  Playing with reckless abandon, Rodman defended the opponent’s best player and put his body on the line night after night.

People outside of Detroit loathed Bill Laimbeer.  A capable scorer and skilled passer, Laimbeer was a man o’ war.  The 6’11” pivotman was a rough, dirty antagonist who set the tone on the floor.  Joe Dumars played guard opposite Thomas.  The Pistons’ third-leading scorer played with a quiet intensity.  A four-time NBA All-Defensive first teamer, Dumars excelled at both ends of the floor.

The Bad Boys boasted firepower off the bench.  Dubbed The Microwave because he heated up so quickly, sixth man Vinnie Johnson was a prolific scorer.  Center James Edwards came off the bench to spell Laimbeer.  Known for his Fu Manchu mustache, Budda featured an excellent fade-away jump shot and was a rugged defender.

Since bolting Fort Wayne for Detroit in 1957, the Pistons had never recorded back-to-back winning seasons.  Under the gritty Daly, who was hired in 1983, the Pistons made the playoffs ten straight years and reached the NBA Finals three times.  Detroit won the Eastern Conference in 1986-87 before losing to the Lakers in a gripping seven-game Finals.  The following year, they blew the lid off the league.  After obtaining Mark Aguirre in a midseason trade for Adrian Dantley, the Pistons went on a tear, winning 31 of their final 37 games.  They finished 63-19 and swept the Lakers in a Finals rematch to capture the first world championship in franchise history.  Dumars was named Finals MVP.

Days after winning the 1989 title, Detroit lost Mahorn to the Minnesota Timberwolves in the NBA expansion draft.  Entering the 1989-90 season, Edwards moved into a starting role and led the team in scoring.  That year, Detroit allowed the fewest points in the league and were second in the NBA in defensive rebounding.  They finished 59-23, then beat the Pacers, Knicks and Bulls to reach their third straight NBA Finals.  Led by Thomas, who was named Finals MVP, the Pistons dispatched the Portland Trail Blazers in five games to successfully defend their title.  Rodman and Dumars were named to the NBA All-Defensive First Team.

The power shifted in the NBA after the 1990 season.  Under the guidance of new coach Phil Jackson — and behind the talent of Jordan, Scottie Pippen and Horace Grant — the Chicago Bulls emerged as the league’s new superpower.

After going 50-32 to finish second to Chicago in the Central Division, the Pistons clawed their way to a fifth straight Eastern Conference Finals.  There would be no three-peat, as Jordan and the Bulls swept Detroit.  In a move befitting the Bad Boys, most Pistons players walked off the floor before it was over, refusing to shake hands with the NBA’s new rulers.

Following the 1991 season, Edwards was traded to the Los Angeles Clippers and Vinnie Johnson signed as a free agent with San Antonio.  Detroit finished the 1991-92 campaign at 48-34, good for third in the Central Division.  The Pistons lost to the New York Knicks in the first round of the playoffs, and the Bad Boys era was over.