Astrodome – The 8th Wonder of the World 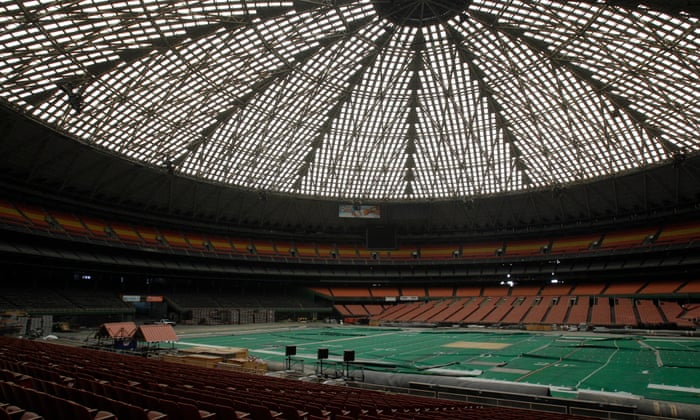 The Houston Astrodome is the world’s first domed sports stadium.

Dubbed the Eighth Wonder of the World, the Astrodome served as home to the Houston Astros for over three decades and pro football’s Houston Oilers from 1968 until 1996.  Featuring six levels of multi-colored seats – all of them cushioned — circling from foul pole to foul pole, it was one of the first stadiums to have luxury suites, with 53.  Behind the pavilion seats in center field was the world’s first animated scoreboard.  Built at a cost of over $ 2 million, Astrolite was a 474-foot long scoreboard-spectacular, it’s 40,000 lights triggered by an Astro home run.

Constructed for $ 35 million [$280 million today] and opened in 1965, the sparkling new arena featured five restaurants and seated 42,217 for baseball.  The left field and right field foul poles stood 340 feet from home plate, while the center field wall was 400 feet away.

Home to the World Football League Texans, the Jim Kelly-led Houston Gamblers of the USFL, and college football’s Bluebonnet Bowl, the Astrodome has hosted several famous events.  Elvis played to 200,000 fans there over six nights in 1970.  Muhammad Ali fought Cleveland Williams in 1966, and Evel Knievel jumped 13 cars two nights in a row in January 1971.  Rock bands Metallica and Guns N’ Roses headlined at the Dome in 1992, one month after the Republican National Convention was held there.  In 2001, WrestleMania X-Seven set an all-time Astrodome attendance record, drawing 67,925 fans.  Tejano superstar Selena played her last televised concert there in February 1995, one month before she was fatally shot by her fan club president.

The Astrodome has a rich baseball history, having hosted the All-Star Game in 1968 and 1986.  Willie Mays hit his 500th career home run there in September 1965 and Nolan Ryan tossed his fifth no-hitter at the dome in 1981.  The venue hosted Game 6 of the 1986 NLCS, an epic 16-inning affair won by the visiting New York Mets, 7-6, in what was at the time the longest game in MLB post season history.

The venerable stadium was the scene of the first basketball game televised in prime time.  In January 1968, a record crowd of 52,963 turned out to see the Game of the Century between the University of Houston Cougars and the UCLA Bruins.  The game was how March became “madness,” establishing college basketball on television, and remains one of the most important hoops contests ever played.  Home to the NBA Rockets from 1971 to 1975, the Astrodome hosted the 1989 NBA All-Star Game before 44,735 fans.

Before moving across the parking lot to NRG Stadium in 2002, the Houston Livestock Show and Rodeo was held at the Astrodome for 36 years.  Considered the city’s signature event, RodeoHouston is the largest livestock exhibition and rodeo in the world.  George Strait & the Ace in the Hole Band played the final concert held in the Astrodome during the 2002 rodeo.

The Battle of the Sexes, a 1973 made-for-TV tennis exhibition that famously pitted Bobby Riggs against Billie Jean King, was played in the Astrodome.  Scenes from the 2017 film by the same name were shot there.

In early 1960, former Houston mayor Roy Hofheinz constructed a model of a domed stadium and presented it to National League baseball owners in an effort to lure a MLB team to Houston.  In October of that year, Houston was awarded a franchise and voters approved an $ 18 million bond for construction of a stadium, which began in 1962.  The baseball team, the Houston Colt .45s, began playing in April 1962 at Colt Stadium, adjacent to the site of the new domed stadium under construction.

The Colt .45s played three seasons at Colt Stadium before moving into their new home.  Originally known as the Harris County Domed Stadium, the venue was renamed the Astrodome after the Colt .45s were rebranded as the Astros following the 1964 season.

Lucite skylights were built into the roof — situated 18 stories above the field – to allow for a natural grass playing surface, but the lights posed a problem.  During day games, outfielders were blinded by the sunlight.  When 30 percent of the panels were painted to reduce the issue, the grass died from lack of sunlight.  To correct the problem, a nylon grass – called AstroTurf – was created, making the Eighth Wonder of the World the first arena to feature artificial grass.  AstroTurf soon proliferated in stadiums across America.

The University of Houston Cougars football team moved into the Dome in 1966, then departed in 1968 to make way for the Oilers.  To play football in the Astrodome, two sets of 5,000 seats were removed to form a gridiron.

Few changes were made to the stadium over the next two decades.  In 1987, the Oilers threatened to move to Jacksonville unless the Astrodome was “brought up to date.”  Not wanting to lose the Oilers, Harris County responded with $ 67 million in improvements.  New turf was installed, seating capacity was increased to 54,816 and more luxury suites were built.  In addition, the original Astrolite board was replaced by new video boards in the upper deck.

By the mid-90s, both the Astros and Oilers wanted new stadiums.  Funding was approved for a new Astros ballpark in downtown Houston, and the Astros moved into Minute Maid Park in 2000.  The Oilers, however, failed to receive funding for a new venue and moved to Nashville to become the Tennessee Titans after the 1996 season.

In 2005, he Astrodome was used for shelter for New Orleans residents affected by Hurricane Katrina.  Once the city’s crown jewel, the Dome was declared non-compliant with fire code by the Houston Fire Department in 2008.  Today, the venerable stadium sits idle in the shadow of the Houston Texans’ home, NRG Stadium, and nearly all its fixtures and seats have been stripped.  Listed on the National Register of Historic Places in 2014, the Houston Astrodome was designated a State Antiquities Landmark by the Texas Historical Commission in 2017.

This week in 1965, the Astrodome opened with an exhibition game between the New York Yankees and hometown Astros.  Mickey Mantle blasted the first home run ever hit in the building, off Turk Farrell.  In Houston’s home-opener three days later, Philadelphia Phillies slugger Dick Allen hit the Astrodome’s first official dinger.