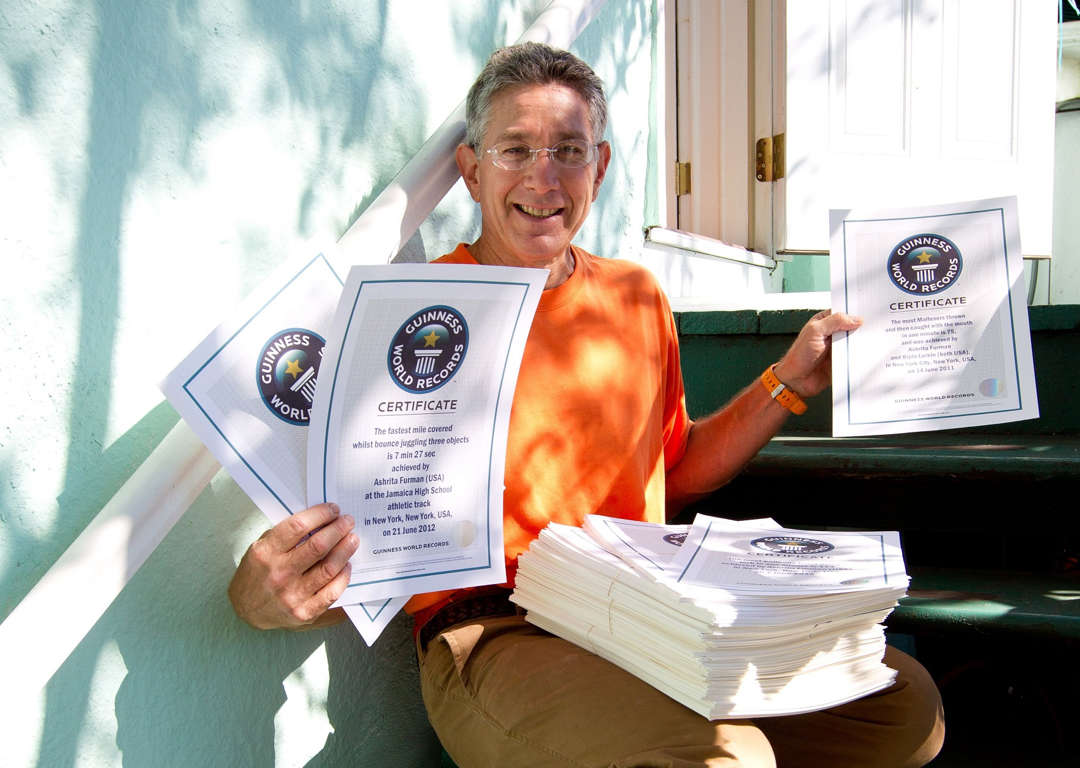 Furman has set more than 300 official Guinness records since 1979.  He has set records in 40 countries and on all seven continents.  Furman has established Guinness marks at the Eiffel Tower, Egyptian pyramids and Stonehenge.  The 5’10”, 170-pound New York native recorded the fastest mile on a Kangaroo Ball along the Great Wall of China, in 15:03.

Ashrita has completed the fastest mile on a pogo stick in Antarctica and traveled the longest distance balancing a pool cue on one finger [seven miles, 220 feet], in Cairo.  He once rattled off a record 9,628 sit-ups in an hour and had 26 watermelons sliced on his stomach in one minute.  In Mongolia, Furman set the mile sack-racing record while racing a yak.

I believe we all have an inner strength that we very rarely use.  I just love the challenge of trying to be the best in the world at something.

A meditation practitioner for more than 40 years, Furman sees his records as a way to demonstrate the benefits of this ancient Eastern art.  A self-proclaimed geek who was beaten up his first day of high school for being a nerd, he incorporates exercise into his spiritual practice.  Many of his records involve childhood activities such as juggling, hopscotch, pogo stick jumping, yodeling and skipping.

Born in Brooklyn September 16, 1954,  Keith Furman attended Jamaica High School.  As a child he was fascinated with the exotic places and people listed in the Guinness Book of World Records but, being a non-athlete, never imagined getting a world record himself.

As a teen, Furman became interested in Eastern spirituality and began studying under Sri Chinmoy, an Indian meditation master who believed extreme physical challenges helped deepen one’s spirituality.   Chinmoy inspired Furman to participate in a 24-hour bicycle race in Central Park in 1978.  With only two weeks’ training, the 23-year-old tied for third place, cycling 405 miles while chanting and meditating.  “I was having a spiritual experience on a bicycle,” explained Furman.  He changed his first name to Ashrita [protected by God in Sanskrit] and vowed to break world records in hopes of telling people about meditation.

It’s not success that provides happiness, it’s progress and training for these records that gives me tremendous joy because I’m making progress.

In 1979, Furman set his first official record by doing 27,000 jumping jacks in five hours.  Thirty years later, he broke the record for eating the most M&Ms with chopsticks in a minute.  Dubbed Mr. Versatility, Furman shattered a 112-year-old record for the fastest five miles on stilts, covering the distance in 39:56.  Some of Furman’s records are incredible feats of athleticism, such as climbing a 9,398-foot peak on a pogo stick.  Others register high on the “fun” meter, like most apples cut in midair with a Samurai sword, dribbling a basketball while on a pogo stick and catching grapes in his mouth [86 in one minute].

Dedicated and determined, Furman is a master of the Hula Hoop.  He once covered a mile in a record 13 minutes, 51 seconds Hula Hooping with a milk bottle balanced on his head.  For his 200th record, Furman completed 64 rotations of a Hula Hoop in one minute.  And in 2010, he spun the largest Hula Hoop ever built [16 feet, six inches] three times for another record.

Furman is as adept in water as he is on land.  He invented Gluggling – underwater juggling – and hopped a jump rope a record 1,608 times while underwater.  In December 2013, Furman traveled to Portugal, where he unicycled a record 1.3 miles – underwater.  Remember his Hula Hoop skills?  Furman once Hula Hooped on the bottom of a pool for two minutes, 38 seconds to establish a new Guinness record.

“Some people just throw their lives away, and then you have guys like Ashrita Furman” – David Letterman.

In April 2009, Furman became the first person to hold 100 Guinness records simultaneously after assembling a group that recited a poem in 111 languages at City Hall Park in New York.  The bunch took turns reading Precious, an eight-line poem written by Chimnoy to celebrate the 45th anniversary of the guru’s coming to America in 1964.  More than 100 participants – followers of Chinmoy from around the globe – recited the poem in languages ranging from Dzongkha to Picard.  Furman read in Zulu.

A vegetarian and celibate bachelor, Furman lives in an apartment in Queens, where he has managed a health food store since 1982.  Now 65, he continues to pursue setting new records.  His oldest remaining mark was set in April 1986, when Furman somersaulted the entire 12.2-mile route of Paul Revere’s Midnight Ride from Boston to Concord.