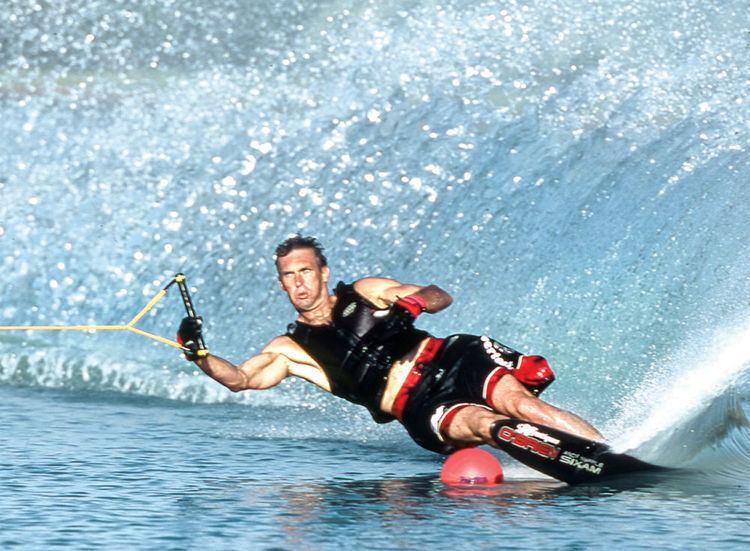 Today we celebrate the birthdays of two athletes who are the greatest that their respective sports ever produced.

Andy Mapple is the best water skier who ever lived.  Born in Lytham–on the Fylde coast of western England—on this date in 1962, he hated water and could not swim.  At 13, he joined his older sister for an outing with family friends to Lake Windemere, the largest natural lake in England.  The group coaxed him into trying water skiing.  After getting up on his very first attempt, all he wanted to do thereafter was ski.  Mapple entered his first waterskiing competition at 15.  Three years later, he was a world champion, claiming the slalom title at Surrey’s Thorpe Park.

Mapple moved to Florida in 1986.  The following year, he married Deena Bush, a two-time world water skiing champion, winner of 20 masters titles, and holder of 22 national records.  They trained together while Mapple continued his winning ways.  He won 14 masters slalom championships and was a member of the British national team for 24 years.  Mapple won nine U.S. Masters overall titles and nine Moomba Masters championships.  He was also an eight-time Pro Tour champion.

If water skiing were an Olympic sport, Andy Mapple would be a household name.  He was a six-time world champion and broke the slalom world record 11 times.  In an intensely physical sport, Mapple’s longevity was unheard of.  He won world championships 20 years apart and entered the season ranked world number one for sixteen straight years.  “He was a role model on and off the water,” said two-time women’s slalom world champion Whitney McClintock.  “A strong man of faith and an athlete no one can compare to.”  Mapple won 169 professional competitions—the most in history—and held the slalom world record for a dozen years.  At 6’2” and 178 pounds, Mapple had the perfect build for water skiing.  He also had a superb work ethic and insatiable appetite to be the best.  According to McClintock, Mapple was “Not only the greatest skier of all time but an ambassador for the sport.”

The greatest water skier the sport has ever seen died of a suspected heart attack on August 22, 2015.  Mr. Mapple was 52.

Charles Frederick Kiraly [keer-EYE] is the only player [man or woman] to have won Olympic gold medals in both indoor and beach volleyball.  Born in Jackson, Michigan—home town of football’s Tony Dungy [Daily Dose, 10/6/16]—on this date in 1960, he moved with his family to Santa Barbara at four.  His father, Dr. Laszlo Kiraly, had been a member of the Hungarian national junior team prior to fleeing during the Hungarian national uprising of 1956.  “Karch,” which means “Charlie” in Hungarian, began playing volleyball with his father at six.  Five years later, they were paired together for young Karch’s first competitive tournament—against grown men.

Kiraly attended Santa Barbara High School.  As a senior, he was named California Player of the Year after leading the Dons to the state title.  He graduated third in his class with a 3.96 GPA and accepted a volleyball scholarship to UCLA.  The Bruins dominated college volleyball during Karily’s four years in Westwood, winning three NCAA championships while going 123-5.  The 6’2”, 205 pound outside hitter and setter was a four-time All-American at UCLA.  In 1981, he joined the U.S. national team, where he helped it to a gold medal in the Los Angeles Olympics three years later.  After claiming the gold medal at the 1986 World Championships, Kiraly won a second Olympic gold with Team USA the 1988 Seoul Games.  Following the 1988 Olympics, Karch retired from the national team, only to return to win the third and final Olympic gold medal of his playing career at the 1996 Atlanta Games.

Beach volleyball is much faster and more demanding than the indoor game.  As good as he was, Karch was even better on the sand.  In a career that spanned four decades, he won 148 tournaments with 13 different playing partners.  Playing into his mid-40s, Kiraly won at least one tournament in 24 of the 28 seasons in which he competed.  He was named the beach league’s MVP six times, was a three-time Offensive Player of the Year and won Defensive Player of the Year honors once.  FIVA—beach volleyball’s governing body—twice named him “Best Player in the World.”  Genetically blessed [Karch had a 41-inch vertical jump], hard-working and intelligent [he graduated cum laude from UCLA in 1983], Karch Kiraly was the “Michael Jordan of Volleyball.”  He trained on New Year’s Eve, Christmas, and only took two weeks off each year.  In 1992, UCLA retired his number and inducted into the Bruins Sports Hall of Fame.

Mr. Kiraly is currently coach of the U.S. women’s volleyball team.  In 2014, he led the Americans to gold at the FIVP world championships and in 2016 became the fourth player in history to win Olympic medals as a player and coach after guiding the U.S. women to a bronze medal at the Rio Olympics.  In 1999, FIVB named Karch Kiraly—who babysat Misty May-Treanor [Daily Dose, 1/26/16] when she was young—the greatest volleyball player of the 20th Century.