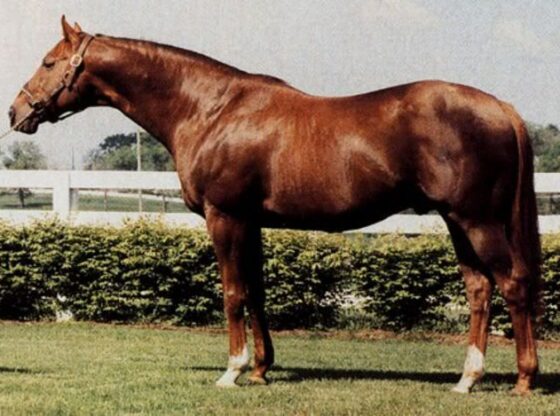 Alydar is the best horse in the history of thoroughbred racing never to have won a championship.

Alydar was born at Calumet Farm—producer of eleven Hall of Fame horses  as well as eight Kentucky Derby winners—on this date in 1975.  Originally established by William Wright, founder of the Calumet Baking Powder Company, Calumet Farm is in Lexington, Kentucky, in the heart of the well-known Bluegrass horse breeding region, Alydar’ grandsire [grandfather] was Native Dancer, who won 21 of 22 career races and was one of the most celebrated thoroughbreds in history.  His damsire [grandmother] was On-and-On, who produced Forward Pass, winner of the 1968 Kentucky Derby and Preakness.  Alydar, trained by John Veitch, was part of the greatest rivalry in horse racing history, going head-to-head with Affirmed— ranked #12 in the Blood-Horse magazine ranking of the top 100 throughbred champions of the 20th Century—ten times.

Alydar and Affirmed met for the first time as two-year-olds in June 1977 at the Youthful at Belmont Park.  It was Alydar’s first race, and he finished fifth—the lowest finish in 26 career starts—while Affirmed captured first.  They faced each other five more times that season, with Alydar winning twice and ending his two-year -old season with five wins and four seconds in ten starts.  Affirmed, whose bloodlines include 1937 Triple Crown winner War Admiral, won seven of the nine races he entered and was named American Champion Two-Year-Old Colt for 1977.  Alydar prepped for the 1978 Kentucky Derby in Florida, winning three times, including the Blue Grass Stakes by a whopping 13 lengths.  Affirmed, who was bred in Florida, took the California route, also winning three times.

On the first Saturday in May 1978, Alydar was a 6-5 favorite at the Kentucky Derby.  Affirmed, ridden by Steve Cauthen, who had just turned 18, broke early and was never worse than third before taking the lead in the stretch.  Jockey Jorge Velasquez rallied Alydar from ninth place to chase Affirmed down before falling a length-and-a-half short.  Two weeks later, they met at the Preakness, where Affirmed took the lead at the quarter pole and stayed there, while Alydar rallied from sixth to lose by a neck.  Affirmed was a speed horse, while  Alydar had a stalking style, which many believed gave him the advantage over the longer distance at Belmont.  Only three rivals showed up to challenge the pair in the third and final race for the 1978 Triple Crown and it became a match race from the start.  Alydar led by a head at the top of the stretch and both horses were head to head over the final seven furlongs before Affirmed won a head.   They ran the fastest closing mile in Belmont history, finished 13 lengths ahead of their nearest challenger and posted the second-best time in the history of the Belmont Stakes, behind only Secretariat in 1973.  Affirmed became the eleventh Triple Crown winner in thoroughbred racing history while Alydar became the first horse ever to finish second in all three races–by a combined total of less than two lengths.

In his career, Alydar ran in 18 major races, won ten, and finished second in seven others.  He lost to Affirmed seven times, but beat him in their final race—the 1978 Travers Stakes—one month after their epic showdown at the Belmont, which is considered one of the most exciting races in history.  Affirmed went on to a quiet post-racing life, while Alydar to Calumet Farms, earning an unprecedented stud fee of $250,000.  He was incredibly successful, as his offspring won purses totaling more than $ 60 million.  Alydar sired 1987 Kentucky Derby and Preakness winner Alysheba as well as Easy Goer, winner of the 1998 Eclipse Award for Two Year Old Colt of the Year along with the 1989 Belmont.  In late 1990, Calumet owner J.T. Lundy and his farm were in deep debt.  On November 13, with the stable facing foreclosure and insurance about to lapse, Alydar’s night watchman was given the night off.  The chestnut stallion allegedly shattered his hind leg kicking a door in his stall.  After emergency surgery was unsuccessful, he was euthanized by lethal injection the morning of November 15.  An investigation revealed fraud, planted evidence and expert testimony proving that it would take three times the force of a race horse’s kicking ability to cause the damage found in the stall.  Alydar was insured for $ 36.5 million.  Both Lundy and the farm’s attorney were convicted and served time in prison for their involvement in Alydar’s death.

Alydar won nearly one million dollars during his two-year racing career.  Blood Horse ranked him # 27 on the list of top 100 thoroughbred champions of the 20th Century and he was inducted into the National Museum of Racing and Hall of Fame in 1989.  Affirmed was ranked #12 on the Blood Horse list, entered the Hall of Fame in 1980, and died in 2011.  Affirmed was the last horse to win racing’s Triple Crown before American Pharoah equaled that feat 37 years later, in 2015.