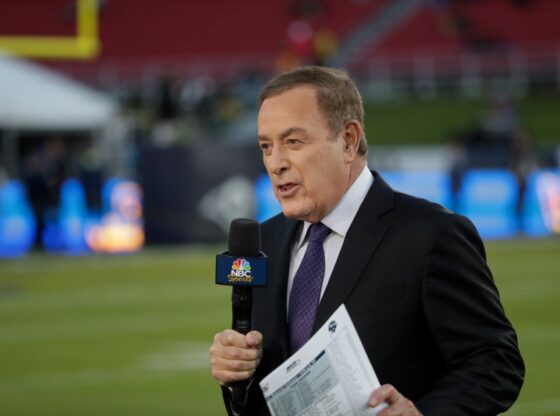 Happy 73rd birthday to one of the most renowned sportscasters of all time.

Al Michaels has covered more major sporting events than any broadcaster in history.  One of television’s most respected journalists, he is currently in his 41styear as a network broadcaster.

No one – not Lucille Ball, not Ed Sullivan, not Milton Berle – has been on prime time television for as many hours.

Called “Television’s best play-by-play announcer” by the Associated Press, Michaels is the only commentator to call a Super Bowl, World Series, NBA Finals and host a Stanley Cup final for network television.

For 20 years, Michaels was the voice of Monday Night Football, and remains the best play-by-play man ever to grace the MNF booth.

He called the 1980 Olympic “Miracle on Ice” hockey game, covered the earthquake in San Francisco during the 1989 World Series, and is currently the voice of the top-rated show in America – Sunday Night Football on NBC.

Of the 20 most-watched broadcasts in the history of American television, 19 are Super Bowl games [the 1983 M*A*S*H  finale is ninth on the list].

Michaels was behind the mic for three of the top ten, including Super Bowl XLIX when, in February 2015,  more than 120 million viewers tuned in to see the New England Patriots beat the Seattle Seahawks with an improbable goal-line interception to seal the game.  It remains the most-watched event in television history.

Born in Brooklyn on this date in 1944, Alan Richard Michaels is the eldest of three children raised in a Jewish family.  He grew up a Brooklyn Dodgers fan, listening to Red Barber and Vin Scully call games while dreaming of becoming a major league announcer.

In 1958, Michaels headed west with his family, leaving Brooklyn for Los Angeles the same year as his beloved “Bums.” He played baseball at Alexander Hamilton High School, alma mater of hall-of-fame quarterback Warren Moon, actress Rita Hayworth and Frank Bank, who played Lumpy on television’s Leave It To Beaver.

After graduating Hamilton in 1962, Michaels attended Arizona State University, where he majored in radio and television while minoring in journalism.  At ASU, he worked as a sportswriter for The State Press student newspaper and called Sun Devil football games on radio.

Michaels’ first job in television was with Chuck Barris Productions, where he earned $95 a week choosing women to appear on The Dating Game.

Linda Anne Stamaton, whom Michaels had recently married, also worked for Barris as assistant prize coordinator for The Newlywed Game.  Michaels was hired by the Los Angeles Lakers as color commentator for Chick Hearn, but was fired after four games because Hearn did not like his work.  He went to work in Hawaii, calling baseball for the Islanders of the Triple-A Pacific Coast League.

He also called high school football and was the football and basketball voice of the University of Hawaii Rainbows.  Michaels was beloved in the Aloha State where, in 1969, he was named Hawaii Sportscaster of the Year.

At 26, Michaels moved to Cincinnati to become the lead announcer for the Reds.  When the Big Red Machine advanced to the 1972 World Series, he helped cover the Fall Classic for NBC Sports.

Michaels left the Reds in 1974 for a similar position with the San Francisco Giants and replaced Dick Enberg as the basketball voice of the UCLA Bruins.  The versatile Michaels covered the NFL for CBS in 1975, then signed with ABC Sports in 1977.

Al Michaels is one of the all-time greats.  He spent nearly three decades with ABC Sports.  A superb play-by-play man, Michaels was the network’s lead baseball announcer for nine years.

His work during the 1989 World Series, when the Loma Prieta earthquake rocked the Bay Area, earned him a News Emmy nomination – making him only the second sportscaster in history to receive that distinction.

In 2002, Michaels was paired with color analyst John Madden for MNF telecasts and the duo instantly became the best football broadcast crew in America.  After four seasons together, they left as a team for Sunday Night Football on NBC.

Sunday Night Football debuted in 2006.  During the 2011 campaign, it overtook American Idol as America’s top-rated show, becoming the first live sports series to hold that position.

Michaels has called SNF since its inception, working alongside Madden for the first three years of the program.  Chris Collinsworth replaced Madden prior to the 2009 season and continues in that role.

Sunday Night Football has been prime time television’s top-rated show for a record six consecutive years since 2011, tying American Idol for most of all time.

In addition to doing play-by-play, the venerable Michaels is a superb studio host.  He has hosted both Summer and Winter Olympics coverage, Stanley Cup Finals, horse racing, and boxing.  The five-time Emmy winner is a sports enthusiast, avid golfer and Los Angeles Kings season ticket holder.

He is perhaps best-known for his famous call of the medal round match between the U.S. and Soviet Union at the 1980 Winter Olympics, in which the Americans beat the heavily-favored Russians and went on to capture the gold medal.

“When I look back, obviously Lake Placid would be the highlight of my career,” he recalled.  “I can’t think of anything that would top it.”  Mr. Michaels has won multiple Sportscaster-of-the-Year Awards, was inducted into the National Sportscasters Hall of Fame and, in 2013 received the prestigious Pete Rozelle Radio and Television Award from the Pro Football Hall of Fame.

In 2014, Michaels released an autobiography titled You Can’t Make This Up: Memories and the Perfect Marriage of Sports and Television, which reached the New York Times bestseller list.

Michaels’ first television role came in 1970, when he appeared with a young Christopher Walken in an episode of Hawaii Five – O.  Subsequently, he has appeared in BASEketball, Arli$$, and Jerry Maguire.

“Eleven seconds, you’ve got ten seconds, the countdown is going on right now!  Morrow, up to Silk.  Five seconds left in the game.  Do you believe in miracles?  YES!”
— Al Michaels, calling the final moments of the U.S – U.S.S.R. 1980 Olympic hockey game