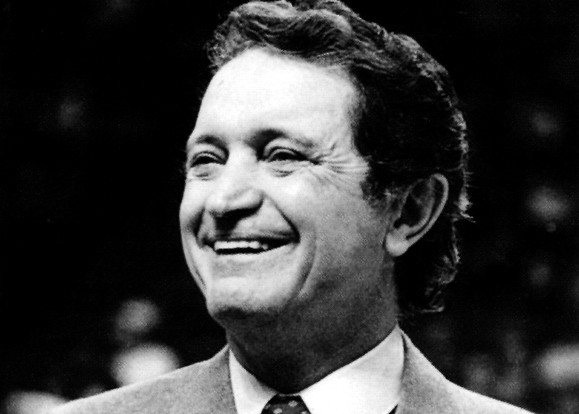 The only mystery in life is why kamikaze pilots wore helmets.

In 20 years as a college basketball coach and 23 more as a brash and feisty television analyst, Al McGuire was one-of-a-kind.  A New York original, he led Marquette University to the 1977 NCAA title, the only national championship in school history.  The son of a saloon keeper, McGuire spent 13 seasons at Marquette, where he recruited many players from New York City and Chicago playgrounds.

Born into a blue collar Irish family in Rockaway Beach, Queens, September 7, 1929, Alfred Emanuel McGuire lived with his family in a room behind the bar his father ran.  He grew up on the playgrounds of Queens and Brooklyn, where he played football against Joe Paterno and basketball against Bob Cousy.  A 6’2” guard, McGuire played at St. John’s Prep in Brooklyn and went on to star at St. John’s University, where he captained the team that finished third in the 1951 NIT.

McGuire played four NBA seasons – three with the Knicks and one with the Baltimore Bullets.  A defensive specialist who averaged under four points per game, McGuire proudly described himself as the “worst player in pro ball.”

Remember, half the doctors in this country graduated in the bottom half of their class.

After assisting at Dartmouth for one season, McGuire got the head coaching job at Belmont Abbey College in Belmont, North Carolina.  He stayed seven seasons, amassing a 109-54 record.  In 1964, the charismatic McGuire was hired by Marquette, a small Jesuit college in Milwaukee.  Marquette won the 1970 NIT after the always-fiery McGuire turned down a bid to the NCAA tournament because he was unhappy with the bracket his team was put in.

Ranked eighth in the country, the Warriors defeated “Pistol” Pete Maravich and LSU in the NIT semis, then thumped St. John’s in the final.  McGuire led Marquette to the NCAA final for the first time in 1974, where they lost to undefeated North Carolina State and the great David Thompson.

The best thing about freshman is that they become sophomores.

A clever strategist and masterful psychologist, McGuire led Marquette to 20 or more wins in 11 consecutive seasons, going 295-80 during his 13 seasons in Milwaukee.  In 1977, he guided the Warriors to another NCAA final, where they would face Dean Smith’s North Carolina Tar Heels.  Carolina featured All-Americans Phil Ford and Walter Davis, while Marquette had lost seven games that season, more than any team in finals history.

On the same night that Rocky won the Academy Award for Best Picture, Marquette prevailed, 67-59, with McGuire leaving the bench in tears before the game ended.  He retired following that season.  “I enjoyed only the game.  I hated practice, recruiting, administration.  Too many memos.”

If winning weren’t important nobody would keep score.

Like football’s John Madden, Al McGuire transitioned flawlessly from the battlefield to the booth, where he became one of the best analysts in history.  He worked alongside Dick Enberg and Billy Packer at NBC.  The trio was superb: Billy and Al argued, while Enberg refereed.

The precursor to Dick Vitale, McGuire, speaking Brooklynese, invented a language all his own.  A big man was an aircraft carrier, an outstanding player was a thoroughbred, a close game was a white knuckler.  Anything first class was Park Avenue while a showboating player demonstrated a little too much French pastry.

McGuire was beloved.  Enberg, who later wrote Coach, a one-man play honoring McGuire, considered him a dear friend – and “the most incredible person he had known” during his six-decade career.  “In 23 years, I never watched myself,” reflected McGuire after retiring from broadcasting.  “I just tried not to forget how I got there.  If you lived in a tenement and become successful, don’t make believe you had grass in front of your home.”

Despite the frigid Wisconsin winters, McGuire was able to recruit great players to Marquette.  Twenty-six of his players were drafted into the NBA, including Jim Chones, Maurice Lucas, Bo Ellis, Jerome Whitehead, and Butch Lee.  Dean “The Dream” Meminger, whom McGuire described as “quicker than 11:15 Mass at a seaside resort” led the Warriors to the 1970 NIT title.

Guard Earl Tatum of Mount Vernon, New York, was visiting Marquette on a recruiting visit when McGuire asked Tatum what other schools he was considering.  Tatum listed LSU, and mentioned that Tigers coach Dale Brown had told the talented prep star that his eyeballs would freeze on the way to morning classes in Milwaukee.

McGuire responded,  “In Baton Rouge, it’s never cold enough for the bugs to die.  The spiders live up in the ceiling.  At night, they come down, get in your ‘fro and start eating your scalp.  You don’t want to go to LSU.  You want to come to Milwaukee, where the freeze kills the bugs.”

Tatum played for Marquette from 1972 to 1976 before being selected in the second round of the 1976 NBA Draft by the Los Angeles Lakers.

If the waitress has dirty ankles, the chili is good.

ND hired Phelps, who won 393 games in two decades in South Bend.  “I learned defense from Bobby Knight and psychology from Al McGuire,” Phelps explained years later.  “People need to be refreshed on what Al McGuire was.  He was a rock.  He was the best.  He did for Milwaukee in college basketball what Vince Lombardi did for Green Bay in football.”

In twenty seasons as a head coach, Al McGuire went 404-144 overall.  A two-time national Coach of the Year, he was inducted into the Naismith Basketball Hall of Fame in 1992.  The following year, Al’s older brother, Dick – a seven-time NBA All-Star who led the league in assists as a rookie – was inducted.  Al and Dick McGuire are the only brothers enshrined in Springfield.

Coach McGuire – who liked toy soldiers, seashells, balloons and nostalgic country songs — died of leukemia in January 2001 at 72.  Five years later, he was posthumously inducted into the College Basketball Hall of Fame.