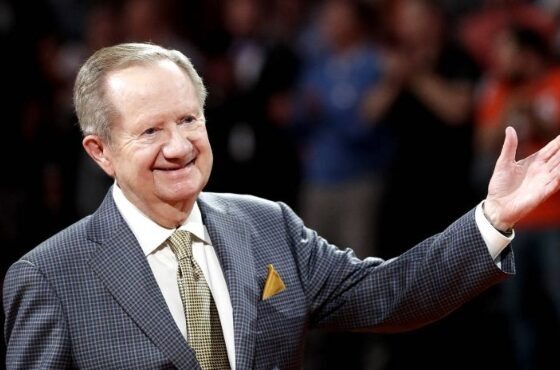 For Phoenix Suns fans, there is only one real McCoy.

Al McCoy was born in Williams, Iowa–a tiny town of 600 residents about 50 miles outside Des Moines– April 26, 1933.  He grew up on a farm during the Depression, with no running water or electricity.  McCoy, who defines teamwork as “a group of individuals working together for the common good” first experienced that concept in Williams, where farmers united to help each other plant and harvest their crops.  A lover of sports, he grew up playing football and baseball, but basketball was always his favorite.  McCoy listened to baseball on radio, with Harry Caray making the calls from St. Louis and Jack Brickhouse from Chicago.  While in high school, he won a state prize in radio speaking which led to a scholarship to Drake University, where he majored in Drama-Speech.  In the summer following his freshman year, McCoy got a job with KJFJ-AM Radio in Wester City, Iowa.  He later worked in FM radio in Des Moines.  Upon graduation from Drake in 1954, McCoy pursued a graduate degree at the University of Iowa while working in television in Iowa City.  He then moved to Buffalo to do radio play-by-play.  There, he befriended Russ Hodges, a well-known national broadcaster who made the famous call, “The Giants win the pennant!  The Giants win the pennant!” of Bobby Thomson’s dramatic walk-off home run in 1951.  Hodges informed McCoy that the Giants were going to leave New York for San Francisco and put their top farm club in Phoenix. Deciding to pursue his dream, Al McCoy moved to Phoenix in 1958 without a job.

McCoy landed at KOOL-FM radio in 1958.  He hosted Phoenix’s first radio call-in show before getting his big break calling Pacific Coast League baseball, where he watched future MLB stars Bobby Bonds and Willie McCovey [Daily Dose, 7/29/15] hone their craft with the Triple-A Phoenix Giants.  McCoy called football and basketball for Arizona State University, covered wrestling and roller derby, and served as sports anchor for Channels 10 and 3 in Phoenix.  In 1967, when the Western Hockey League decided to put a minor league hockey franchise in the desert, McCoy became the voice of the Phoenix Roadrunners.  The NBA’s Suns arrived in 1968, bringing the Valley of the Sun its first professional major sports franchise.  Although Suns General Manager Jerry Colangelo and McCoy had conversations about the play-by-play spot, McCoy was not hired.  He nearly accepted a job with the San Diego [now Houston] Rockets before eventually signing with the Suns in 1972.

McCoy has covered two NBA Finals and called Arizona Diamondbacks baseball games alongside Joe Garagiola during the team’s 1998 inaugural season.  He considers Walter Davis the Suns’ most underrated all-time player and the 1992-93 team that lost to Chicago in the Finals the best squad in franchise history.  During the 1976 NBA Finals in Boston Garden, McCoy had to fling an inebriated Celtics fan off his lap to call the “Shot Heard ‘Round the World,” when Suns forward Garfield Heard’s basket sent Game 5 into triple overtime.

Al McCoy has been calling Phoenix Suns basketball for the past 44 seasons. His tenure with the Suns is the longest with one team among current NBA broadcasters.  McCoy is adored by Suns fans and admired by his peers.  “I have watched with pride and admiration what Al has come to mean to generations of Suns fans,” said Colangelo, a four-time NBA Executive of the Year and member of the Naismith Hall of Fame.  McCoy’s signature calls include “Shazam” after a three-point shot, “Zing go the strings” for a swish, and “Heartbreak Hotel” to a shot that barely misses or an agonizingly close loss.  Mr. McCoy is an accomplished jazz pianist and aficionado of fine food.  An Iowan through and through, he remains humble and loyal despite being in the NBA limelight for over four decades.  He is a member of the Iowa Hall of Fame, Arizona Broadcasters Association Hall of Fame, and received the Alumni Achievement Award from Drake University in 1994.  The Suns dedicated the Al McCoy Media Center in 2007, the same year he won the Curt Gowdy Media Award [Daily Dose, 7/31/15].  In 44 years as the Voice of the Suns, Al McCoy has missed only one game.  The 2016-17 season will be his 45th NBA campaign.

On this date in 1972, Al McCoy broadcast his first game as the Voice of the Phoenix Suns, an exhibition contest against the ABA’s Utah Stars [Daily Dose, 5/13/16] from Salt Lake City.  “Hot” Rod Hundley—who would later become the radio voice of the Utah Jazz—provided color analysis alongside Al.