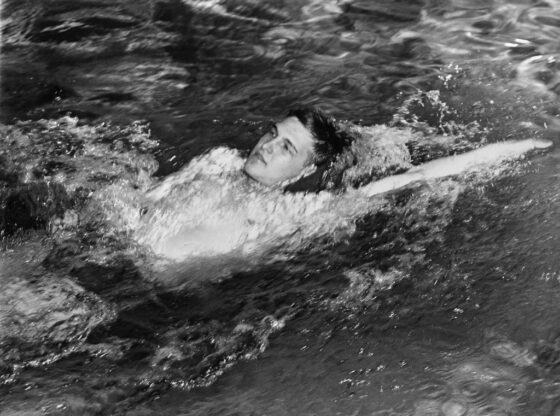 The greatest backstroker in history learned to swim in a drainage ditch.

Adolph Kiefer’s contributions to the sport of swimming are monumental.  He was the first swimmer to break the one-minute barrier in the 100-yard backstroke.  Kiefer broke 23 world records – some of which stood for a quarter-century – and set national and world marks in every backstroke event.

Kiefer had just turned 18 when he went off to Berlin as the youngest member of the 1936 U.S. Olympic Team.  There, he set an Olympic record in the 100 meter backstroke, a mark that stood for 20 years.

He attended the University of Texas, then joined the Navy, rising to the rank of lieutenant.  In the Navy, Kiefer taught what he called the Victory Backstroke – a basic stroke with arms starting in an overhead “V.”

In 1947, he founded Adolph Kiefer and Associates, and held 14 patents on swim equipment.  Kiefer invented the plastic kickboard, produced the first nylon swimsuit, and designed the first turbulence-reducing lane lines.

He invented the soft gasket swim goggle, allowing athletes to swim with vision – and without eye irritation.  With a huge passion and joy for swimming, Kiefer was larger than life.

He invented a flip turn for the backstroke that is still used today, invented a PVC rescue tube that is the standard in lifeguarding equipment, and served on the President’s Council on Fitness, Sports and Nutrition for three presidents.

Kiefer ran the Navy’s swim instruction program in World War II.  He quickly realized that many sailors and senior officers didn’t know how to swim and were drowning after shipwrecks.

The Navy was actually losing more lives to drowning than bullets.  He designed a training program that taught two million recruits to swim, contributing significantly to the war effort.

In 2014, Kiefer told the Chicago Tribune, “The biggest thrill of my life was having people tell me that I saved their life by teaching them the Victory Backstroke.”

The son of German immigrants, Adolph Gustav Kiefer was born in Chicago June 27, 1918.  He learned to swim quite accidentally, when he fell into a drainage canal along the north branch of the Chicago River.

“I didn’t know how to swim,” he recalled.  “But I floated on my back and kicked my feet.”  Wanting to learn to swim, he received formal instruction at the Wilson Avenue YMCA.   Kiefer attended Roosevelt High School.

Located in the Albany Park neighborhood on Chicago’s northwest side, Roosevelt is the alma mater of Nancy Faust, legendary organist for the Chicago White Sox.

Kiefer became the first to break the one-minute mark in the 100-yard backstroke while competing as a 16-year-old in the Illinois high school championships in 1935, covering the distance in 59.8 seconds.

At the Illinois state championships the following year, Kiefer lowered his time to 58.5, which stood as the state record until 1960.

Kiefer broke more than 20 records after shattering the one-minute barrier.  In January 1936, he went 1:04.8 in the 100 meter backstroke at a meet in Detroit to claim the world mark at that distance.  In April 1940, Kiefer lowered his own world record in the 100-yard backstroke to 57.9.

At the 1936 Summer Olympics, Kiefer befriended Jesse Owens, who won four gold medals in Berlin.  Their friendship lasted over four decades, until Owens’ death in 1980.

Kiefer met Adolf Hitler while working out at a pool before the 1936 Games.  The two shook hands and exchanged pleasantries through an interpreter.  “I should have thrown him in the pool and drown him,” Kiefer later said.  “It would have saved a lot of lives.”

After winning his 100 meter race in Berlin by better than half a pool length, Kiefer returned to Chicago.  His gold medal was stolen shortly thereafter, and in 2007 USA Swimming presented Kiefer with a replacement.

There were no Olympics in 1940 or 1944 because of the second World War, so what would have been a longer Olympic career changed course.

Adolph Kiefer was inducted into the inaugural class of the International Swimming Hall of Fame in 1965.  He was married to his wife, Joyce, for 73 years until her death in 2015.

Despite being confined to a wheelchair later in life due to neuropathy, Kiefer continued to swim every day in a pool at his home in Illinois.  Mr. Kiefer died May 5, 2017, at 98.  At the time of his passing, he was the last surviving gold medalist of the 1936 Summer Olympics and America’s oldest living Olympic champion.