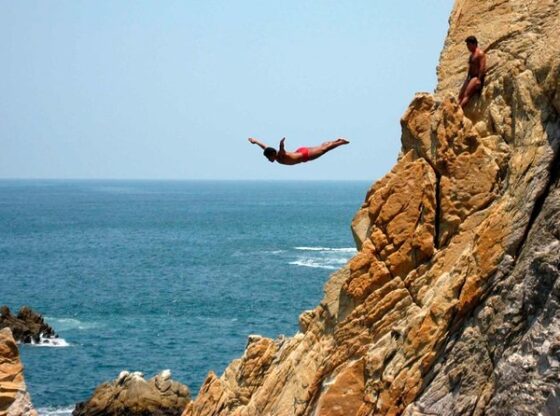 The La Quebrada Cliff Divers are a group of professional high divers based in Acapulco.

Acupulco de Juarez is a city and major seaport along the Pacific coast of Mexico, 240 miles south of Mexico City.  Situated in a deep, semicircular bay, it is a port of call for shipping and cruise lines running between Panama and San Francisco.  Once a getaway for Hollywood stars and millionaires, Mexico’s largest beach resort city is now dominated by luxury high-rise hotels.  No trip to Acapulco is complete without a visit to La Quebrada Cliffs, where divers leap from great heights into brilliant blue waters.

Spanish for “gulch” or “ravine,” La Quebrada is one of the most famous tourist attractions in Acapulco.  Every day, young men dive from the majestic cliffs jutting out over the Pacific into the thrashing waters below.  The tradition started in 1934, when two young local fishermen challenged each other to show their courage by throwing themselves into the sea from the tops of La Quebrada.  More than eight decades later, the tradition continues.  The cliff divers are Acapulco’s most iconic attraction and are renowned worldwide.  The 1963 Elvis Presley film, Fun In Acapulco, first brought the cliffs to worldwide attention.  Filmed largely on location, Fun In Acapulco was the top-grossing musical of the year and Elvis’ last film release before the start of “Beatlemania” the following year.

Ernst “Teddy” Stauffer was a Swiss big-band leader, playboy, club owner and hotelier.  After opening “The Tequila a Go-Go,” he managed several Acapulco hotels and served as an ambassador for Acapulco.  Stauffer helped attract Hollywood celebrities and made the place famous, turning the tiny fishing village into a world-class destination.  In the late 1940s, Stauffer, who became known as “Mister Acapulco,” managed Hotel Mirador and turned the boys who were diving at La Quebrada into stars.  Looming above the cliffs, El Mirador became one of the city’s top tourist attractions.  Today,  the hotel’s La Perla restaurant offers tourists a buffet dinner package overlooking the diving show.

Over 60 divers make their living at La Quebrada.  They perform five shows daily, beginning at 1 pm.  More diving follows in the evening, with performances at 7:30, 8:30 and 9:30.  The final show starts at 10:30 pm and includes torches, which are carried by the divers until they are extinguished upon entering the sea.  General admission for the observation deck is $ 3 and includes a beer, soft drink or water.  Divers earn part of the admission fee, sales of food, drink, and souvenirs.  After the show, which lasts less than 30 minutes, they pass through the crowd and solicit tips.  The La Quebrada Cliff Divers make $ 550 a month – plus health benefits – and get one day off per week.

It takes years of training before divers are ready to take on the perilous cliffs of La Quebrada.  Most begin at five or six, and divers join the show at 15.  They dive six days a week – rain or shine – and average ten dives per day.  After swimming across the narrow, 12-foot-wide channel, the young men climb with bare hands and feet to a platform 135 feet above the sea.  There, they pray for protection at the altar of the Virgin of Guadalupe before making their leap.  Timing is critical for the divers.  Water depth in the Gulch can vary from six to 16 feet, with an average depth of 12, so divers must time their jump to coincide with the incoming waves.

At seven, Raul Garcia began diving from the cliffs at La Quebrada to help rescue fishing spears and nets from the rocky bottom.  One of the original divers, Garcia made over 37,000 dives during his 65-year career.  The Acapulco legend was made famous in a 1962 Timex watch ad in which Garcia dove into the choppy sea with a Timex strapped to his wrist.  After safely reaching the shore, Timex spokesman John Cameron Swayze states, “Timex: it takes a licking and keeps on ticking.”  Garcia made his final dive from the La Quebrada Cliffs at 11:45 pm on New Year’s Eve 1999, at age 72.

No one has ever been killed at La Quebrada – Spanish for “broken” — but many divers get injured.  Wrist, back and neck problems are common.  After leaping from more than 13 stories, divers hit the water at 75 mph.  The divers’ vision becomes worse over time, just like pelicans, which eventually go blind from plunging into the water at such a high rate of speed.  The Acapulco cliff divers carry the torch – both literally and figuratively.  The sight of seemingly fearless divers leaping from dizzying heights while carrying torches is a sight to behold, and makes the 10:30 pm show their most popular.  The divers [all of whom are men] are legacies.  You cannot perform at La Quebrada unless your father, grandfather or uncle was a diver.

Violence in Mexico has hurt the La Quebrada Cliff Divers.  Growing crime has driven away tourists.  A decade ago, 150 cruise ships a year visited Acapulco.  Today, that number has fallen to around ten.