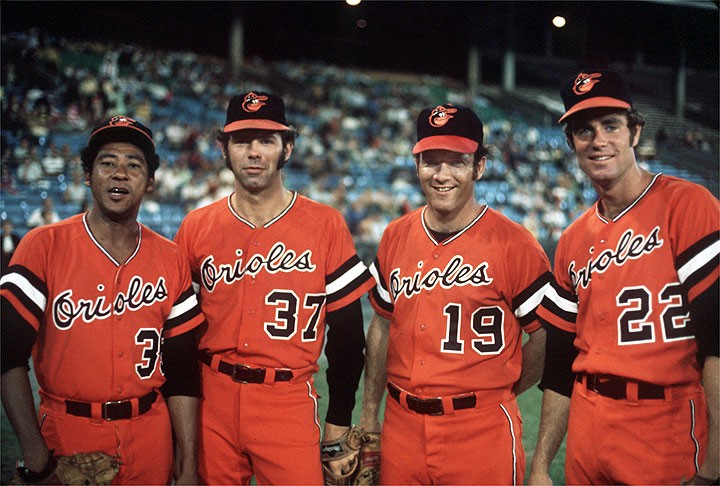 In 2017, not a single pitcher in Major League Baseball won 20 games.  In 1971, the Baltimore Orioles featured four 20-game winners.

Along with the 1920 Chicago White Sox, the 1971 Orioles are one of two MLB clubs to have a quartet of 20-game winners.

Led by Jim Palmer, Dave McNally, Mike Cuellar [KWAY-ar] and Pat Dobson, the Birds finished first in the American League East with a record of 101-57, a dozen games ahead of the second-place Detroit Tigers.  Managed by Earl Weaver, the Orioles went on to claim their third straight AL pennant that year.

In 1971, Baltimore’s foursome combined to pitch 1,081 innings and a whopping 70 complete games.  By contrast, the 2017 world champion Houston Astros’ six starters combined for just under 760 innings-pitched and threw only one complete game.

To illustrate just how much the game of baseball has changed in the past four-plus decades, three of Baltimore’s four starters threw 282 innings or more in 1971, leaving their nine relievers only 202 innings of work.  Forty-six years later, Astros workhorse Mike Fiers led the staff with 153.1 innings while 21 relievers gobbled up 686 innings over the course of the regular season.

Palmer and McNally were starters for the Orioles team that swept the Dodgers in the 1966 World Series.  In Game 2, the 19-year-old Palmer became the youngest to pitch a World Series complete-game shutout, while McNally tossed a 1-0, four-hit shutout in Game 4 to complete the sweep.

Nicknamed Cakes because he ate pancakes on the days he pitched, Jim Palmer was the mainstay of Orioles teams that won six pennants.  A three-time Cy Young Award winner, Palmer led the AL in wins three seasons and ERA twice.  In 37 appearances in 1971, he went 20-9, struck out 184 and posted an ERA of 2.68.  The only pitcher in history to win a World Series game in three different decades, Palmer never surrendered a grand slam or back-to-back homers in 19 big league seasons.  The four-time Gold Glover had his number 22 retired by the Orioles and was elected to the Baseball Hall of Fame in 1990.

In 1969, Cuellar was obtained from Houston.  Featuring a screwball and change-up, the Cuban southpaw went 23-11 and captured the 1969 Cy Young Award.  The addition of Cuellar formed the Big Three – the heart of the best staff in baseball.  Between 1969 and 1971, the trio combined for eight individual 20-win seasons, three straight World Series appearances, and went 188-72 [.723] during the three-year stretch.

Born on Valentine’s Day 1942, Pat Dobson was obtained from San Diego for the ’71 season.  The right-hander had the best season of his career that year, winning 12 straight outings – nine of them complete games – and posted a scoreless inning streak of 23.  Dobson, who led the Birds’ staff with 187 strikeouts, recorded his 20th win with a 7-0 shutout of the Cleveland Indians in late September, but pitched only 6.2 innings in the post season.  A 1972 All-Star, Dobson never again won 20 games and was dealt to Atlanta following the ’72 campaign.

Despite their outstanding pitching statistics, the Orioles lost the 1971 World Series to the Pittsburgh Pirates in seven games.  In addition, none of the Birds’ hurlers came close to winning the AL Cy Young Award, which was captured by Vida Blue in a landslide.  Only McNally, who led the league in winning percentage, appeared on the Cy Young ballot, garnering a mere seven percent of the votes [Blue went 24-8 with a 1.82 ERA.  He was also named 1971 AL MVP].

Arguments can be made for other pitching staffs as the greatest in history.  The 1998 Atlanta Braves, with John Smoltz, Greg Maddux and Tom Glavine, were superb.  Same goes for the 1966 Dodgers, who featured Sandy Koufax, Don Drysdale, Claude Osteen and Don Sutton.  But no one can argue the greatness of the 1971 Baltimore Orioles, who combined for a 2.89 ERA, almost a full run less than the league average.  Palmer, McNally and Dobson finished in the top eight in ERA and all four cracked the top ten in wins.  Most importantly, never again will a pitching staff boast four 20-game winners in the same season.

Jim Palmer is the only starter from the ’71 Orioles still living.  Dave McNally died of lung cancer in 2002.  Pat Dobson was diagnosed with leukemia November 21, 2006, and died the following day.  In April 2010, Mike Cuellar died of stomach cancer, at 73.